I love you Mommy! 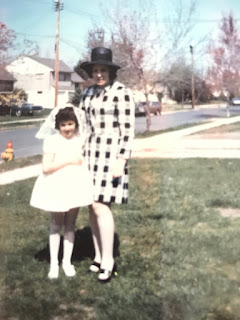 Well, as you can guess this post is a tribute to my Mother for mother's day! There is no way I am ever going to truly convey who the person my Mother really was. I say that because I don't know all the words to describe her magnificence.

Lately, it's been a struggle because I really miss my Mother. Grief is cyclical so it's hitting me hard right now. Mother's Day is upon us, so the impact of her not being here is heartfelt. I loved her so much. She was the anchor God gave me here on Earth.

When I was 19, I decided I wanted to go to the Fashion Institute of Technology(FIT) in New York City. I was in Community College taking courses to prepare me for FIT.  My memory is kinda fuzzy but I remember being bummed, because I couldn't find a place to live in NY.  My recollection is that I was at my desk and my Mom came into my room and said,  "Do you want to go to FIT?"  I said, "Yes!"  The next thing I know I am on the Jersey turnpike headed north.  If going to FIT and living in NYC was my dream, my mother was going to make it happen and she did!

For the 32 years I lived in NYC, I called her every day, sometimes more than once. She was not much of a phone talker, but every once in awhile, we would have such insightful conversations. I could tell her anything. One of my favorite calls was about "Sex in the City." She couldn't believe all the women on the show needed to have all that sex. So, I said 'Mommy when you were in your thirties you were married and having sex, right?" She said yes! "Well, these women have urges like you did and just because they aren't married doesn't mean they shouldn't be able to fulfill these urges?" I was really shocked by her response. "Gina, I never really thought that, but you're right!" From this moment on, my mother also understood that her 30 something year old single daughter was fulfilling her sexual urges and her daughter knew her mother approved.

My mother's love was deep and the size of the milky way. There were no ends to it and she did everything with love! She was my favorite person period. We loved to shop together and go to the movies. All my passions come from her own. My mother introduced me to films when I was very little...old movies that played on the weekends. I remember tap dancing in our den with Gene Kelly. Why did I go to FIT? Well, since I was little, my mother took me shopping for my clothes and she would show me different styles and point out the good fabrics. She herself dressed with such style. My sister and I always tried to live up to her fashion standards.

This is her influence in my life: Associates Degree from FIT and 18 years in the fashion industry mostly as a fabric buyer.  Finished BA at the New School with concentration in Film, and an MA in Media Studies. My two areas of study in film are Documentary film and Pre-code era films.

My mother was a woman of the 1950's raising 2 daughters in the feminist era of the 70's. She bought us Helen Reddy's " I am Woman!" I remember belting that song out in our den. She used say to us that we could do anything that my brother could. Very bold, considering we were living under the Italian Father Regime! (My father did catch up with the feminist movement by the mid 1980's.)

She was an incredible Mother, but she blew away the grandmother thing!! What she did for those kids. I know that she was their anchor too! I remember telling my Mom that I was going to have a baby. She was so excited and couldn't believe at 80 she would become a grandmother again. Well, Myah & my mother had an instant connection. They would laugh and play together! It was precious to watch. My mother referred to Myah as HER "baby!" 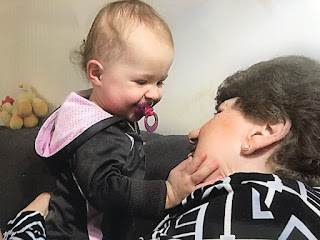 Myah was 2 when my Mother passed and she still misses her. Just last night, she asked what my mother's voice was like. The sadness I feel mostly is that Myah won't have her Mom Mom.

One last story about my Mom. She was always doing things for people in a very humble way. My parents owned a deli in our hometown of Pitman. Next to our store was a big old white house. It was occupied by an elderly woman who couldn't get around. She would call our store and order things she needed. I remember one time helping my Mom put everything in a box to take over to her. Once in the house, we put things away for her and I waited as my Mom went to speak to her. There was money on kitchen table which my mother never took. Sometime later I come into the store to work and my Mom was in the back crying. I said "Mommy what's wrong?" She explained that the old woman had died in the house by herself.  It was sad but I remember looking at my Mother and thinking what a beautiful person she was.

My Mother, Aunt, and Cousin were involved in a tragic car accident in Dec of 2015. My Aunt died instantly, my cousin was injured and lives with debilitating pain and my mother was on life support for 6 weeks fighting like hell to live for all of us! I remember after we told her that we had to take her off life support. She sat up looked at me and with her dark intense eyes asked if it was true? My eyes responding with the unbelievable truth for I knew she trusted I wouldn't let her down.

Love to all Mothers.  To my Myah for making me a mother and a better human being every day! Mommy, if you are reading this you must know that I am turning into you!!! I guess justice is served!

Love and Peace to You All!!