I always Sing in the Rain with Gene Kelly 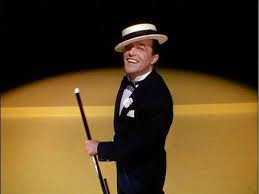 Sorry for no post on Friday, but I was a little under the weather.  I had already planned what I was going to write.  Many events in the world have taken place over the weekend, but I am not going to write about them.

Instead, you are going to be dazzled by one of my favorite subjects! That is " Gene Kelley." Last Thursday was his birthday. I have so many good memories tied up with this dancing man...like the first time I saw him. I was 5 or so at the time. My family was down in our den and we started to watch "Singing in the Rain." Of course I was totally entranced with the dancing. I actually got up and went in the corner of our den and danced to the movie. That day it was the music and dancing that got me!

After that, I watched the movie anytime it was on. But it wasn't just for the music and dancing anymore. The corny story and Donald O'Conner's "Make em Laugh" definitely had me. Jean Hagen's voice and I have always loved Debbie Reynolds (But that's a whole other post.). I still think the sexiest dance ever is the one toward the end of the movie between Gene and Cyd Cyresse.

Gene's talent was immense.  He not only danced, but was a choreographer and director too. Anytime I see his big beautiful Irish smile, my whole body smiles with him. Having ready a few books about him, I do know he really wanted to be remembered as a choreographer. I know what you are saying: he was a "Movie Star!"

Yes, he was a movie star, but he was also a visionary. He knew he could change the world through dance. He could use dance as away to communicate and he did. There were no top hat or tales for him. Just a polo shirt with chinos and a pair of loafers. Gene was the everyman of dance.  He believed art belonged to everyday people, not just the upper echelon.

Gene had studied ballet for quite a long time. He seamlessly incorporated ballet in many of his musicals. By doing this, he popularized ballet to average viewers: people who may not have been familiar with this art form or couldn't afford to see it otherwise. He was also very innovative with dance. He pushed it's limits. He danced with the cartoon characters Tom and Jerry in "Anchors Away!" In "It's Always Fair Weather," he did a number on roller skates, and in "Summer Stock," he did this routine with a newspaper that is unbelievable. And yes, he sang in the rain!

I will admit that I've seen "'Singin' in the Rain" over a thousand times. There are so many connections to this movie. One is that it has been the only anti-depressant that works for me. If I was having a hard time at work or school, I would put this movie on and all my troubles would seem to fade away with Gene's smile.

Another connection with this film is with my husband. In the film theory class where we met,  "Singin' in the Rain" was viewed. It was his first time seeing the film and he was blown away by it in the same as I had been. Also, during the significant scene where they decide late at night to turn the bad silent movie in into a full blown musical, they have a calendar. and Gene, as the character Don Lockwood, says March 23rd is his my lucky day! Then Donald O'Conner, as the character Cosmo Brown says, "No, it's 1AM and your lucky day is March 24th! Well, March 24th is my lucky day too, because it's my husbands birthday! I love it!  The song from the movie, "You Were Meant For Me," was sung during our wedding ceremony. It is the very romantic song Gene sings to Debbie Reynolds as he woos her on a vast sound stage.

My biggest connection to the movie is (no surprise!) with my Mom. She is the one who introduced me to this movie and all the other old movies that live in my heart. We would always watch movies together. For instance, I remember watching Mike Leigh's "Secrets and Lies" with her. We both cried and when the film was over we sat in silence for awhile. When Jess and I showed her a German film called "The Lives of Others," she immediately said I want see another like that!

When my Mom visited me in New York, we would go to the theatre. One of the last times she visited, I took her to a show that Patrica Ward Kelly (Gene Kelly's last wife) does about Gene. I was skeptical about how good it was going to be. I warned my Mom that it could be bad.  She said let's see it anyway and plus it gets us out for the night.  We went and I can tell you this woman really did an incredible job revealing who Gene Kelly was, as well as the details of their relationship. Also, other close relationships he had. There were only 2 people Gene could call in the middle of the night. One was Brooke Atkinson and the other was Frank Sinatra. It was mesmerizing for my Mom and I. After the play was over, my mom said how glad was that she had come and thanked me for taking her. Honestly there was no one else in my life I would have enjoyed seeing it with more than her.  I think how appropriate that the last show we saw together was about Gene Kelly.

Last month when we were walking across the border from Panama back to Costa Rica and it started to rain. My daughter Myah starts singing "I'm Singing the Rain, Just Singing in the Rain!" My eyes misted up because I realized I couldn't call my Mom to tell her what Myah had just done. She definitely would have gotten the biggest kick out of that!