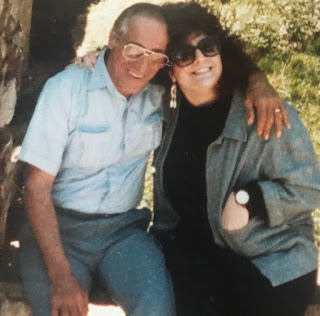 Yesterday my Dad would have been 86 years old. It's hard to believe he has been gone over 18yrs. You know your parents will eventually pass, but you try not to think about it. Then BOOM!  It happens and you feel like you are having an out-of-body experience.

I really don't want to go into the gory details of my father's cancer. He suffered. And that was the hardest part. This vibrant person who I had known my whole life now could not walk or speak. It became all-consuming for us, to the point that on the day he passed I went outside and prayed to God to take him that morning. It was the quickest prayer ever answered.

My father was a very hard-working man. It was only in the last few years of his life that he wasn't working 2 jobs. He had his Tastykake Route and my parents also owned and managed a restaurant. My Mother and brother ran it during the day. When my Dad finished his route, he came home, washed up, got changed, and went to the restaurant. Later on, they sold the restaurant and bought a deli in our town. It was a little easier for my Dad, but he still worked the route and was at the deli in the evening. When my Dad retired, he had built up his route so much that eventually it took three people to run it.

He was something! Funny as hell! Could make fun of my Mom and hit all the marks! My Dad never went to college, but he was so smart. He loved to learn and was like a sponge. There was always a book on the night table, and if there was no book, he went downstairs and started to read the Encyclopedia. His interests went from the Civil War, to Politics, to Art.  He was a big National Geographic fan, though his consuming passion was Italian History and Italian American History.

Now, what strikes me so often now is not only his absence but that of my Mother's. When he first died, I was struck by how much I missed my parents as a whole even though I still had my Mom then.  In January, it will be three years since I said goodbye to Mother (AKA my Rock).

Today, I miss them together. When they were alive, every new thing I embarked on in my life I was able to share with them. They always were pretty positive and supportive. My father admitted years later that he was so angry with me for moving to NYC. He wanted to spend time with me, since he had stopped working so much by then. Though once he saw how I was making a place for myself there, I got the, "I'm so Proud of you Baby!" every time I went home.

That wasn't my mother at all! She asked, "Do you want to move to NYC?!" I said, "Yes." And the next thing I knew, I was heading into New York City. My Mother always held our dreams for us! I think I got her when I had Myah!! She loved it, but I think she even thought my time was up!

Mom, never underestimate a daughter raised by a father who taught her to dream and a mother who gave her the strength, courage and determination to make her dreams come true!!!

I miss my parents all thew time. Sometimes it's hard to get my footing without them. What would they think of some of the things I am doing? How much I'd love to show them Costa Rica. They would be crazy for Myah that's for sure! She is so silly like my Dad and beautiful like my Mom.

As an older parent I worry about leaving Myah.  I remember something my Mother said to me once. We were on the phone and I told her I'll probably lose it when she dies. Her voice grew very stern and she said I raised you to be strong and when I die that is what you will be! Couldn't imagine it then, but when she died I lost her plus my Aunt Nancy. Then a month or so later my Aunt Bea. It felt like the rug had been pulled out from under me.

Was I strong? Yes.  And that's because I am my Mother's daughter. My Mother and Aunts wouldn't want me in a mental ward because they passed.

I went on creating new dreams for me and my family...just like my father taught me. And I am making those dreams come true with the strength and determination I get from my Mother.