Fashionista at the beach? 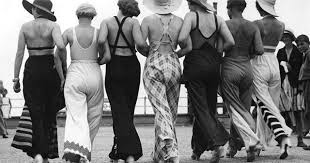 My dilemma lately has been about my beach fashion! I know it seems so trite compared to what is going on in the world.  But for someone who went to the Harvard of fashion schools, spent almost 20yrs in fashion and lived in NYC for 33yrs, it really is a dilemma.

The only things I miss about living in New York during this time of year are running in the park and dressing for the streets. Some people think fashion is pretentious. Well, it really can be like some art. Fashion is an art form. The way we dress is a way of expressing ourselves. Those who create fashion
are really using their minds and some very sophisticated skills that are crafted by intense schooling and in some cases apprenticeships.

If you don't believe it then go to the Metropolitan Museum of Art in New York and look at their Anna Wintour Costume Center.  When I first moved to NYC, the Met had an exhibition of Yves Saint Laurant. I had never seen anything like it!

Well, that was until the Alexander McQueen exhibit at the Met in 2011.  My husband waited early in line to get us tickets. I married the least fashion conscious person in the world! But he enjoyed the exhibit immensely and came out with an appreciation for the art form of fashion.

One of the reasons I love movies of the 1930's is because of the fashion displayed in those films by the early geniuses of film making. Part of their genius was in creating the celebrity within the form of fashions they were wearing on the screen.  This is subject I can talk about for hours, so I had better stop here.

Back to my dilemma! Now, I have been mulling over this problem of mine and the other day I came up with my solution for now. I still get to be Gina here and a part of me will always be a New Yorker and dress with reference to that world. That may change over time but I am not going to stop and pretend to be anything other than myself. So I still wear black and a crossover bag! Get my nails and hair done! Occasionally wear make-up. No big Caftan yet?!