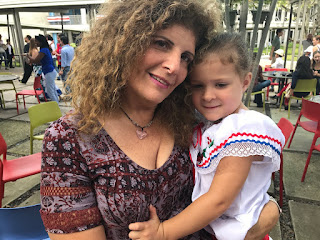 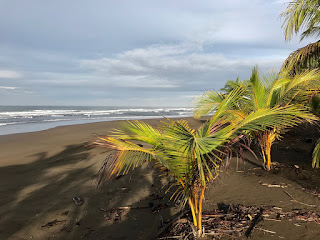 Sorry I am late today but unfortunate circumstances delayed me today. We decided to spend the weekend in Parrita, a small place by the ocean. We love it there and many of the pics I shared with you are from there.  Today was the actual Costa Rican Independence day so many people are off from work.  Myah's school was closed so that'a why we took off early today. Well, it wasn't  early enough. I honestly don't think we were thinking because the traffic was horrible. What usually takes an hour or so took us 3 hrs. It was starting to get hot and Jesse's usual congenial mood was gone.

I do want to share one thing that I thought was ironic, but maybe not. As we drove Jess had the Hamilton Musical on in the car. Here we are in another country that is celebrating their independence and here we are listening about our independence. I really love the United States and what it was founded on. It's really incredible what those men did. It made me sad because I don't like our government at all right now. Those in office forgot about all our forefathers and what they created and the tremendous sacrifice that was made by everyone. They don't honor that for sure.

Costa Ricans celebrate their independence very similar to us in the states. Parades, lots of food and fireworks. The one thing they do is include the children in the celebration. They can because Independence day falls while they in school. Thursday, Myah's school had each grade level participate in music or a parade. Myah & her classmates dressed in traditional costume and sang the Costa Rican National Anthem. They were too adorable. I kept thinking why don't we do this? Then I remembered July 4th is in the summer. I really wish we did something like this because these kids are being taught about their country and a love of country is being instilled.  That I think is important because I don't think everything would have gotten so out hand. Just a thought. If you want to know I had no problem letting Myah dress up. There is never anything wrong experiencing another culture. Just know her next 4th of July will probably be different.

As I told you we were in traffic for 3hrs and we were playing with the idea of pulling over to eat and Gina the bipolar wonder suddenly realized that she left her meds home. I can't be without them. Do I feel stupid?! After that we were like let's eat. Jess pulled into a restaurant we came to in January. The owner is a great guy. Originally for Iran. We get there only to find out he has no electricity and his chef never showed. He had a family to cook for and us. We felt so bad for him we waited 2 1/2 hrs for lunch and then turned around to head for home. I don't think the day got any worse than that. Hoping we can go tomorrow. You would think a girl from Jersey would understand about the shore traffic!!

Rosanna Russell said…
Hi! I'm just catching up! You're a good writer G! I think you've got a great natural style, a "voice" that is clear, engaging and articulate! I really like the sequential back & forths, maybe the director in you?! I've always considered myself a writer type- it was one of my great strengths in school: turning kids on to writing!! Not an easy feat in the standards-based environment! But since I've always found writing comforting & enticing, I was able to impart that in so many kids!
*Now, as a veteran educator, I must also ask you to proofread you work, querida!!
(Not too bad- I'd say about 2 or 3 easy-to-spot typos per post.... can't help myself!) I'll always be a Teacher, hope you don't mind. Since you are a good writer, I feel it's my responsibility to help you honor your writing by presenting it "clean"... it honors all writers, it is the pact that writers agree to. It pays respect to the power of words, right?! You have a powerful natural style (so don't get self-conscious at all) Thanks for you posts, it let's us in your fascinating journey!!
September 26, 2017 at 1:14 PM