"Raise a Glass to Freedom" 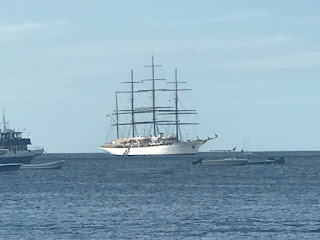 Every day we take Myah to school and we listen either to the Moana or Frozen Soundtracks. Once we drop her off, Jess and I put on the Hamilton soundtrack. We saw this musical while living in New York. It is beyond brilliant! It's the story of Alexander Hamilton and the American Revolution.

As we proceed the long way home so we can listen to Lin-Manuel-Miranda and his diverse company of players sing the story of the birth of a great nation, my heart fills with so much pride. Our forefathers (and mothers!) were not only smart, but forthright in their commitment to freedom. They believed in what they were fighting for and to do whatever it took to win!

I felt that the USA was always the good guy, something I don't think was really true, but it seemed at least to try to be. Today reading the papers, listening to NPR and following the news on the internet, it's like the foundation of the country I love so much is no longer in place. And you can't just blame one side of the aisle or just one person. Greed, the lack of empathy, and the lack of back bone are some of the reasons why this is happening.

We the People...By the People...For the People...Of the People...these concepts seem to be lost. The People seem to come last, before rich politicians and wealthy corporations get theirs. Americans need to stand up and reclaim their constitution, not just for themselves, but those who fought so hard and sacrificed so much for these ideals.

Lin-Manuel Miranda wrote Hamilton in the Obama era when diversity and love of country were the dominant themes of his presidency. We all celebrated that, but truthfully his musical is needed even more now to remind Americans of where we came from and how these ideals have been fulfilled.

Yes, I live in Costa Rica and you can say what a cowards we are for leaving. We really don't care what you call us. Moving here was a strategic plan for our daughter's safety from white supremacy. When the present leader choses to support and be supported by such groups, then you have to take precautions. I have no shame for leaving and I know my husband and I will figure out ways to fight for the land of the free and home of the brave from where we are now.

Rosanna Russell said…
Hi G! Sooo beautifully articulated! You're Americans through & through, regardless of whether you live here or elsewhere. My parents came in 1966, in their 30s, with 3 young kids in tow. They became citizens relatively quickly because my mom had been a Special Ed. teacher in Argentina (an initiative of Eva Peron) and they had just passed the Equal Education for All Act in the U.S. so Special Ed. teachers were an area of shortage in the work force. I became a U.S. citizen when I was 18. We, naturalized citizens don't take our citizenship for granted. Now the U.S. is in a struggle for its soul, its fundamental spirit. Many people said over the years that the U.S. is a young country, in its youthful exuberance! Now it is entering its young adulthood, that awful, confusing time one must begin to define oneself. I was horrible, tried to avoid growing up- drugs, sex, and Rock 'n Roll!! I'm not proud of that phase...it was somewhat self-destructive, entirely selfish... I believe the U.S. is going through that phase now, which means we, as a society, are growing up! Growing up is painful!!! But I do know that this great American society will eventually accept its adulthood, its responsibilities, its burdens.
You and your family will always be part of the American fabric, no matter where you are! You are embassadors of what's best in American society! You really are!!
January 23, 2018 at 10:50 AM