It's not all Black & White 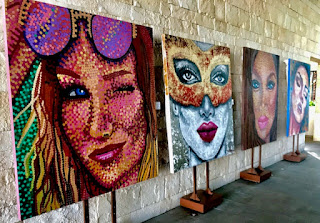 Today, I am pushing myself. Since Friday I've had an intestinal virus. It's really wearing me out! Every day is a push, but being sick just makes it a bit harder. I didn't know if I should write today, because I didn't think I had anything else to say. That's really not true as I always have something to say! LOL!!!

Something I saw on my way to Myah's school today was an ad on a truck. What caught my eye was that the girl in the ad was white. That is not really unusual here. Most of the ads feature white men and women.  I first thought that living in a latin country it would be different and I would see brown skin people in ads. Not so.

It is so funny how prejudice in different cultures revolve around the whiteness. If you are latin and your skin is white, it means you have come from Spanish descendants. The different shades of brown show how much black from the early slaves or brown from indidgious people you have in you.

Does that sound familiar? I know my family is from Southern Italy and we are olive skinned. I have an olive tint, but my father and many others in my family are dark olive. Yes, those in the northern part of Italy are whiter and blonder. I never wished my family was from the north. My desire was to look like Sophia Loren who is from Naples, near where my father's family is from.

Yes, I have prejudices like most people. I am very prejudice against tourists who visit NYC. I don't like narrow-minded people, women who voted for Trump because he was chosen by God, or especially people who discriminate against those of us with mental illness.

The color of someone's skin isn't what makes a person. At least to me. I was raised by two incredible people who sat me down and explained that there are good and bad in all people. It's the way people treat you that is important. They gave me good values that have helped me on so much on my journey.

I grew up in a very white town. There was prejudice against us in the beginning for being Italian. That changed as time went on. When I was in high school I think there were 3 black kids. Two of them were light skinned black brothers who were good athletes, so assimilation was easy. The other was a dark skin girl a few years younger than me. I really didn't know her, but felt sorry her having to endure being in this school.

I've lived in 2 black neighborhoods. In the late 1980's I lived in Fort Greene Brooklyn. In that time, there were only a few white people. It was hard and I was mugged twice by black teenagers. The second time was at my front door and after 4 years of living there, I decided to move. Fifteen years later, I moved to Harlem. It was a very different experience in that we were welcomed and other white people lived in the neighborhood.

As a white woman living in Harlem, black men were flirty but not in a vulgar way at all. Some men asked me out and others offered marriage proposals. All pretty innocent.  Black women were different. When we first moved into the neighborhood, an older black woman spit on me. It was gross but I understood why she may have done it. Not too long ago, I got in an argument with a black woman in the grocery store. I went to get rolls and didn't realize there was a line. Now, I know one thing about me. My biggest pet peeve is line butting. In NYC, everyone does it especially the white privileged male.

When this woman started yelling at me, of course I reacted by defending myself. I didn't realize there was a line. She was so nasty and just kept going on and on. I caught myself because I realized that 30 or 40 years ago, this black woman would never have been able to talk to me like this without getting thrown out or arrested. Whatever anger she had from her day or me being white had nothing to do with me. If it made her feel empowered to yell at a white woman, than so be it. I didn't take it personally. It just made me feel more for black women.

Those of color are discriminated against just because of their color! The arrogance of white people kills me. We are all God's children. I think God made all different types of people from different colors and cultures to keep the world interesting!  Definitely not to hate!

Love  and Peace to You All!!