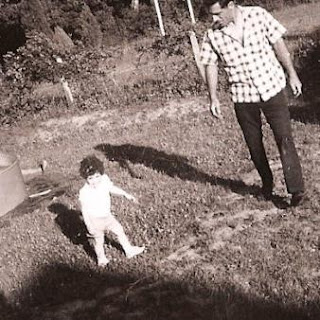 Father's day today and of course this reminds me how much I miss my father. It's almost 18 years since his passing. You would think it's easier but it's not. I still ache for his smile and warm hugs.

My first thought was to tell you all about all the great things about my dad. There were many. Instead I am going to tell you about how my relationship with my father went from very distant to one of the best relationships I've ever had.

As I was growing up, my dad worked as a route salesman for Tastykake Baking Company. He'd come home, eat dinner, and play with us in the living room. When I was 10, my parents bought a restaurant and both of them worked there along with my brother. My dad still kept his Tastykake job and my mom worked during the day. This was a hard time for me. I was a total Mommy's Girl and had a hard time with her being gone.  What was worse was I never saw my dad anymore. He would come home from his day job, take a shower and then go to relieve my Mom at the restaurant. No longer did we play in the living room. 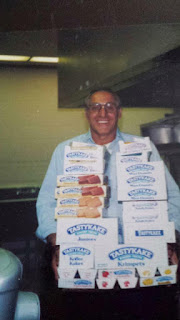 As children do, I created a story in my head that my father didn't love me because he never played with me anymore. As I became a teenager, this story became cemented in my brain and heart. This kept me angry at him for a very long time. We had a hard time relating for many years.

At the age of 27, I surrendered to my eating disorders and was fortunate to enter the 12 Step Program of Overeater's Anonymous. This program gave me life! When it came to my 8th step (make a list of all the people you have harmed), my father was near the top of my list.

I had harmed my father by being distant, angry and combative. My reasoning for all this was based on the story I had made up in my head as a child that he didn't love me. I was no longer a child and I realized that I had a father who loved me more than I could ever imagine. My father worked 2 jobs most of his life. He spent 30 yrs. driving for Tastykake, a job he really didn't like, in order so I could grow up in a nice place, have nice clothes, have a car, and travel to Europe. He always loved my singing and supported my dreams.

I finally got to step 9, the one where you make your amends to the person you have harmed. It's always a freeing experience, but you don't feel this way when you start out. I was very nervous to say everything I needed to say to my Dad...basically because up until then, we had a hard time communicating.

My parents were sitting on the couch in our family room and I sat in a chair in front of him. I expressed that I owed him an apology and explained my childhood story I had created about our relationship and that, now as an adult, I realized I was loved by him in such an unselfish way. Hopefully he would accept my apology and that we could move forward in our relationship.

When I looked at my father, he had tears streaming down his face. He reached his arms out for me and we hugged and cried for a long time. This began a healing, and one of truest relationships for me. He and I were able to sit down and tell each other the things we did that hurt one another and how to say what we were feeling to each other. One thing my father revealed to me was why he was angry I went to New York. I was 20 and my Dad no longer had a business to worry about. He had time now and he really wanted to spend time with me. I wished I had known that, because maybe I would have waited and finished school in Philadelphia.

I grew to love our talks. Just being with him became such a joy. He really was proud of all the work I was doing to improve myself. We talked for hours on the phone and he became a confidant.

The true gift he gave me is this: I was always awkward around men, but once my relationship changed with my father, I had a much easier time being myself with men. In my relationship with my husband Jesse I have never been afraid to be myself and express myself. I have been able to be open and honest. Letting myself be vulnerable to this wonderful man!

Thank You Daddy for letting me be the woman I want to be with the man I love!! 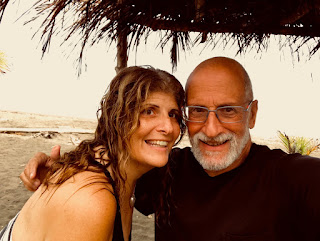