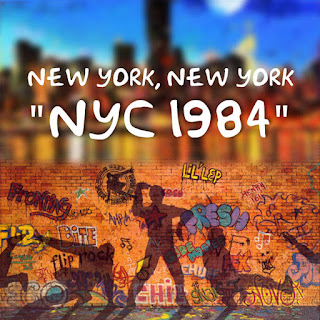 Today is June 4th and it's always been a special day for me. It's Gina Rizzolo-Epstein's Independence Day! Kind of my own July 4th! On June 4th 1984, I moved to the wilds of New York City! My great adventure began.  I left the cocoon of my parents home and the confines of small town living.

In 1984, New York was still pretty scary. The subway trains were old and dirty. There was still graffiti all over the city and trains(The tapestry of the city that I miss) and no white person dared go to my old Harlem neighborhood. Alphabet city was off limits and even the Upper Westside was run down.Brooklyn wasn't the hot place to live like it is now.  There were Mom & Pop stores.  No big corporate stores.

The broadway shows that were big when I moved to NYC were the ground breaking La Cage Aux Folles, Dreamgirls with Jennifer Holiday, Brighton Beach Memoirs, Sunday in the Park with George, and Glengarry Glenn-Ross.  I used to walk around the theaters a lot. That was because I really wanted to be an actress instead of studying fashion. Times Square and the theatre district were much different. Head shops, peep shows, adult movie theaters and a few regular movie theaters were mixed in this area. The streets were busy, but not the way they are now. You can barely walk in these areas now, because it's so commercial. Worst is trying to get a cab after leaving the theater. Seriously, I kinda miss the way it used to be. It's a big tourist area now and I guess that's good for the city. I just wish there was a video out there for people who plan on coming to the city that teaches them how to walk in NYC!

So, on June 4th 1984, my brother packed the car with my stuff and I got in not knowing what was in store for me.  My mother sat in front as my brother drove and I sang Frank Sinatra's NEW YORK! NEW YORK! in the back seat.  We drove up to the Fashion Institute of Technology (F.I.T.) and went into my dorm that was already occupied by barely clad young woman. Yes, my first roommate in NYC was Sonja (Treamont) Morgan. She is now on the Real Housewives of New York.  She thought I was a hick and I was!  Sonja took me to my first club - the Limelight! A place I frequented like many of the clubs that were popular then. My new life began......

I lived in NYC for 33years and I have many stories I can tell, but I'm not going to now.
The most important thing about those 33yrs is that I was in constant work on myself. What I can say is that I had a profound experience and learned that I was worthy of everything I had and wanted. In other words I got myself in a way I never thought possible. New York is a great place to grow!