It's Not About My Birthday!!! 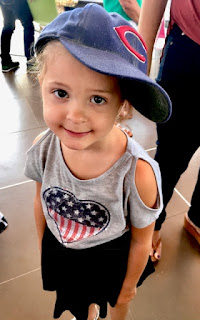 Yes, today is my birthday! I've decided not to write about that today.

This morning at Myah's school, we went to a United Nations Day Celebration. There were 44 different countries celebrated today. The kids were dressed in costumes that represent their country of origin. Last year Myah represented Italy, because I'm Italian. This year she represented the USA!

They call each country alphabetically and then the students from that country parade around the gym. It was so great! The kids were so into it. Once all have been called, they sit on the floor and sing. The first song they sang was John Lennon's Imagine. I cried because this would have warmed John Lennon's heart and I also cried because my phone just beeped to tell me that a bomb was found at the Time Warner building in New York City.

The Time Warner building is a big subway hub so many people could have been killed. This scares me because not only do I have friends who live in NYC, but I was in the city when 9/11 happened. The ramifications are really extreme.  I am assuming that white supremacists were responsible because the Clintons and Barak were also targeted with pipe bombs.

I am doing my part and voting Blue!!! My concern is that, even if we get a majority in the house, will the Democrats have the "balls" to do what needs to be done?!

This is what I was thinking as Myah's schoolmates sang and embraced each other's countries!

May the the grace of God be present always and may we be able to forgive!!!

Llise said…
Thanks - we really need to keep praying for our country. We really need to unite. You living in Costa Rica gives you an unbiased look at our situation and I appreciate your comments. Love always!! Llise'
March 20, 2019 at 2:31 PM

Anonymous said…
The candle contains a shade indicating its denomination, and also serves to notify the slot attendant if service is required. The candle flashes in specific patterns for service needed, entry made into the machine, jackpot, door not safe, and other features. Because of the "stock", "renchan", and tenjō techniques, it's possible to make money by simply taking part in} machines on which someone has simply lost an enormous amount of cash. They are easy to recognize, roaming the aisles for a "kamo" ("sucker" in English) to bet365 go away his machine. A participant can also be given a number of|numerous|a variety of} nudges following a spin .
December 6, 2022 at 11:27 AM