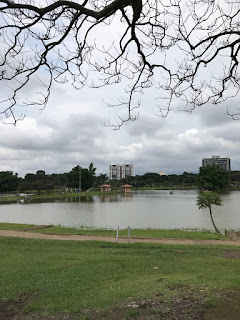 Right now I am at a loss as to what to write. I had planned what my blog would be about today but I woke up to the news of the shooting in Las Vegas over night.  I feel numb and still don''t understand it. Every day it's something else in the States. Between the hurricanes, Trump's racial comments about Puerto Ricans, and the lack of response to the crisis in Puerto Rico...all has been disturbing to say the least.

The first thing that came to mind was that those people who were lucky to survive will never be the same.  I know this because, even a small tragedy like my Mother and Aunt's car accident has devastated us all. Last night, many people got the late night call like I did almost two years ago. My mother lasted six excruciating weeks. Seeing her on life support was like being in a horror movie. So, I can only imagine what it is like for some of the victims families going to hospitals to see their wounded family members or worse, having to go to the morgue.

What is not the same for me is I am always waiting for the ball to drop. Life was good the day of my mother's accident. We had a tree trimming party and couldn't wait until to tell my Mom about it. You know, I can't even remember if I ever told her? It doesn't matter. I'm always waiting for bad news since the accident.

With the natural disasters and now this mass killing, there is a lot of PTSD and anxiety out there. How will these people get help? With healthcare being cut for the mentally ill, so many people aren't going to get what they need to get through this.

What is happening to the home of the free and the brave?  It's really scary over here in Costa Rica and I can only imagine what it's like in the States.

"We the People!" It doesn't feel like that anymore.

Love you all and please stay safe!!!

Barb Silverberg said…
Yes, it is a very sad day and you were right to leave and escape some of this madness. It must be hard to be so far away in times of tragedy, but you and your family have carved out a new life. Much love, Barb!
October 2, 2017 at 11:19 PM

While I don't think gun ownership is ideal for me, I will thank the veteran who protects me and will not get in his or her way.

The real problem, in my opinion, is that some parts of the US - as a society - has stopped caring about the value of life and has sought to make life miserable for everyone else.
October 29, 2017 at 12:43 AM