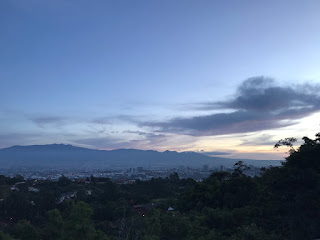 There wasn't a clear path to what I was going to write today like there has been on other days. Something has been going on in my head ever since Myah received her first report card. It was really an outstanding report card and we are very proud, but that isn't what has gotten stuck in my mind. The words adapted and transition keep playing around in my head.

Myah's teacher said she had completely adapted to the class, and her transition has been smooth and filled with new and positive experiences. Adapting and transitioning are the words that strike me. How am I adapting or transitioning? Have I done this already, or am I still in the process? Good questions to ask.

When I moved to NYC 33yrs ago, I was 20 yrs old and knew really nothing about New York other than I wanted a career in fashion.  I remember the transition from the small town where I grew up to this big city was very scary. How did I adapt and transition then? You know it's not really clear other than the first time I took the subway. My solemn oath to myself was I would never ride the subway! Now, they are much different today then they were in 1984. Once I rode the subway uptown that was it.  I was hooked.  That might have been the beginning of both my adapting and transitioning.

Here I am many years later in a new country with a husband, a daughter and a dog, which makes it easier because I am not lonely like before. Myah has been our main focus and we see that now is the time for us to move forward.

I feel a lot of the transitioning started back in New York when we started preparing for our move. Once we were out of the house and moving around from hotels to air bnb's, it's very clear how there was no looking back. It was hard because life in NYC was good. We had great friends and lovely neighbors. Myah"s school was small but good. She had friends and dance! It's like we weren't running from something.  More like running to something and that's a better quality of life.

The adapting part can be tricky especially when moving to a different country.   The latin culture I am familiar with having had lived in NYC for many years.  Speaking Spanish would definitely be a way of adapting. We have pretty much adapted to our surroundings. Traffic can be hard.  The fact that I live in a house is different for me. I've lived in small apartments most of my adult life. Our condo in Harlem was probably the biggest place I lived in New York. The space we have is pure luxury to us!

This move has taught me lots, but most of all, once we decided to leave, the transition from New Yorker to Expat started. Once here we had no choice but to adapt for Myah's sake, but for our own as well.

Truth is in life we are always either adapting or transitioning. It's a constant and how we choose to do these two things is up to us. Creating the life I want is adapting to my goals. That has become clear on this journey.

Love & Peace to You All!