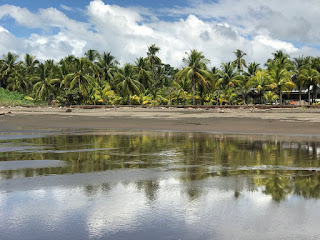 Well, here goes nothing! My usual thought before I start writing to you all of you. I am going to jump right in. I am having quite a hard time adapting here in Costa Rica.  To tell you the truth I am not totally sure why. It's beautiful here with the mountains and the beaches. The weather is perfect for the most part.  We've met people in our condo community and do some socializing with the parents of some of Myah's friends. All really nice people. I just don't see potential for long term friendships.

The major problem is that I am not a suburbanite. Yes, I grew up in suburbia but as soon as I was old enough I took a bus to Philadelphia every chance I could get. Actually, I lived in Philly for 4 months before I moved to New York.  I'm going to sound like a snob, but I find suburban life trite and limiting. Now, most of that comes from my past. I know that, but no one here has asked me what I do or if I had a career. It's like I've been categorized already. White wife & mother who lives off husband!

Do people label in New York?...yes and no. I am most sure in certain organizations they do. But people go to New York to live out their dreams and enjoy the anonymity that the city offers. NewYork is also too diverse to categorize or put people in a certain box.

I love New York for all the different people I met and experiences it gave me. My eternal gratitude to the city. For when I needed help, there were so many different avenues for me to embrace. Very thankful for all the times I chose to re-create myself.  The city chimed in with it's availability of numerous opportunities to so.

Here I am now trying to recreate myself at 54 again and I'm in a place where I don't speak the language or drive a car. Look, it's a challenge at any age and I've done this a few times. With tons of support and my own strong determination to get what I want.

Let me put this in the plainest terms of how I am really dealing with. I don't know if you saw that movie, Adaptation, that starred Nicholas Cage and Meryl Streep? Nicholas Cage plays Charlie Kaufman, a screenwriter adapting the book "The Orchid Thief. " In this movie, a look alike brother appears who is also a writer. The brother represents another part of Charlie's identity. He is tossed between two worlds and eventually the brother is killed. Charlie choses one identity and lets the other die.

I feel like Charlie...that there are two of me and I don't know which one to let go. You see, my identity for the past 33yrs has been as a New Yorker. I've always prided myself on being able to make it there and have a rich full life. I never once felt like a caged bird as I do here. The effort to recreate myself into something truthful will be hard in this new place.

My struggle is heartfelt and almost crippling right now, but I trust this too will pass like all the other struggles I've overcome.

Barb Silverberg said…
Gina, I am sorry it feels so hard right now. You have courageously moved to another country, another language, and another culture. The adjustments must be enormous! Together with Jesse, you will figure out a way. Your blog is inspiring and I enjoy reading about your journey, physically and emotionally. Keep identifying your wants and needs both for you and your family. Hugs!!
February 19, 2018 at 7:31 PM

Rosanna Russell said…
Hi again! Sorry I'm just now reading this, I have so much to share around this, I can't even put it all down here! As an immigrant to the U.S. at age 6, and then dedicating my whole teaching career to English language learners in NYC, I can tell you that you will never be able to, nor should you, ever "let go of one" over the other. There is a huge body of research literature on "acculturation" and becoming and being bicultural. Every one of us that identifies with 2 (or more) languages, cultures, countries, always struggles with aspects of our identity. I always felt that I "didn't quite belong" to either American or Argentinean cultures fully. It's not easy... I actually think it's the same thing with being a city person or a suburbanite. Each environment has its benefits, and certainly its disadvantages. (Now that I retired, I hate being stuck in suburbia so the 1 good thing about caring for mom in Brooklyn Heights on the weekends is that we can get out & enjoy "the city" a bit! But staying at mom's,car parking is a major hassle, the noisy neighbors, the 4 am garbage trucks... ugh) In real life, I believe, "neither brother dies". However, parts of us do "take a back seat" at times, and that can feel awkward. I'm sure you do miss NYC!!! You can't be here AND live there... (You may even miss NYC like you miss your mom, it can be pretty intense). *My mother actually did her doctoral dissertation on "Acculturation in Hispanic Adolescents"! I could go on, but better, let's talk!!
March 7, 2018 at 11:47 AM

lakotaeagleson said…
The bonus is calculated 룰렛 in your deposits so you can to|you possibly can} just add the cash to your account and keep it safe there till the bonus helps you to learn how to to|learn to} win more often. It's the simplest and safest approach to be taught the variations between the betting systems I'm going to highlight in the last chapter of this information. Always choose on-line casino sites licensed by the United Kingdom Gambling Commission or the Malta Gaming Authority .
November 5, 2022 at 4:30 AM