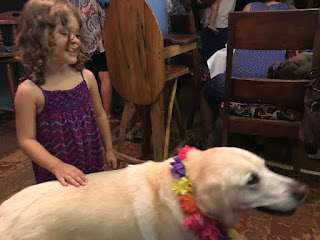 Just wanted to share how my day started out because it was amazing! My beautiful daughter came into our room and to my side of the bed and I hear good morning Mama! I turn and look and she is smiling at me and holding Maise who has her tongue out! How precious it that!! They both climb in bed with us and morning has officially begun!! I am grateful!

When we were in Paritta the other weekend we had a cool experience at the Pelican. One of our neighbors who works for the embassy told us of this great restaurant called the Pelican. It served traditional Costa Rican food. Jesse & I were really into going to this place. Saturday afternoon Jess looked up to see where it was. We've become so dependent on the Waze app. Well, there were 2 Pelicans so we chose closest one that was part of a hotel on the Beach near Jaco. It was a little bit of a drive because the Cocomar where we stay if off the beaten path. Well, that being said our lovely little daughter fell asleep in the car that is no big deal right? Wrong!!! The beautiful child I told you about this morning only exists when she get's up herself.

We enter the Pelican with a crumpy Myah and realize we aren't at the right Pelican. How did we deduce this? Well, first the band is playing the doors, There is a bar and tables all scattered around. What makes us kind of mad is there are dogs walking around so we could of brought Maise.

The place was filled with a older hippy expats! Perfect place for us! It was great to be in a place where I could just talk and didn't have to get my translation app out.  Very interesting because I didn't think it bothered me so much. We haven't gone for Spanish lessons yet because we have been focusing on Myah and getting our selves situated. We are not home sick at all. I think it's about lack of being able to always communicate so we are understood. That is why I like doing the blog so much.

The night turned out great. The hostess who I think looks like Carol King and Jesse says Barbara Streisand was great. She had all these toys for Myah and that really helped her mood. We played Jenga while we waited for our food. Another reason we knew we were not at the Pelican we thought we were supposed to be.

The night turned out great we had Margaritas and danced to the music. Myah was attached to Shirley this big white dog that was roaming around. Met some people who live near where we were staying. They invited us to their house and I wish we went on Sunday because they were really cool and it would be nice to know people in Parrita. When we go back!

Some business I want to share is I've decided not to Post anything on Sundays. It's only Monday,Wednesday, and Friday.  Sundays are family time.

Barb Silverberg said…
I am really enjoying following your adventures! Sounds like heaven!!!
September 26, 2017 at 12:33 AM